HIV stigmatisation: “These are my shoes”

HIV stigmatization is probably one of the most important factors hindering the end of the HIV epidemic. Stigmatization is the negative judgement of someone because of, in this case, HIV. Stigmatization comes in many forms and I do not want to go deeply into that except that there is stigma by others, but also self-stigma. These lead to people living with HIV not disclosing their status or not even knowing their status as they are worried to go for testing and people living with HIV having difficulties in adherence to treatment and retention in care.

HIV stigmatization in the Netherlands

During my PhD research in Amsterdam (UMC Amsterdam, location AMC),  one of my conclusions was that HIV stigmatization, specifically concerns about disclosure of the HIV status, leads to lower levels of adherence to treatment (Source: Sumari-de Boer, Aids & Behavior, 2012). This was based on data that I collected during interviews with structured questionnaires in which patients were being asked issues like ‘People don’t want me around their children since I have HIV’ and ‘People point fingers to me’. Through these questionnaires, you get a good quantification of the stigma experienced or perceived, but the individual stories are way more touching. Stories such as a young guy traveling all the way to the other side of the country for HIV treatment and care to prevent others knowing that he is HIV positive and a woman who lost contact with most of her family members since she was found HIV positive are a few examples. I also remember that when I told people that I am doing HIV-related research, they were often asking whether I am not afraid to catch the disease. Having to explain that giving someone a hand or talking to him or her does not pose a threat, shouldn’t be necessary at these times anymore. Especially not in a country like the Netherlands, a well-developed country with good insurance and care facilities.

In KCRI, several studies have looked at HIV stigmatization. Pregnant women who cannot even tell their husbands they have been found HIV positive are one of the most striking examples. It often leads to trouble in taking medication to prevent their newborn from being infected. HIV stigmatization is probably worse than having the disease itself as is also mentioned in the book ‘These are my shoes: the changing face of HIV stigma-30 years of HIV/AIDS stigma in Tanzania and threats towards HIV eradication’ written by my sincere colleague Dr. Elichilia R. Shao. The book gives a good overview of HIV/AIDS stigma in Tanzania and the consequential threats towards HIV eradication. The book starts with an introduction on why HIV stigmatization is existing and an explanation of several forms of stigma. It is followed by different chapters written by other colleagues, who are mainly health care workers, on their experience with stigmatization and the effect it has on the life of people living with HIV. To illustrate those experiences, they described several cases with touching stories of the consequences of stigma. In addition, one chapter is written by a person who was found HIV positive. That chapter gives a very clear picture of what may go on in people living with HIV’s minds when it comes to stigmatization and the actions they take based on that such not testing, not disclosing and not adhering to medication. The book ends with a set of recommendations on how to lower HIV stigmatization in order to speed up the eradication of HIV. Dr. Elichilia has done a great job by writing and editing this book and I would advise everyone to read it to understand how stigmatization, that even you and I are often unwittingly carrying out, is making the lives of individual people living with HIV so difficult, but also really leading to continuation of the epidemic. So, let us all try to stop HIV stigma in order to end this epidemic.

If you wish to buy the book, let me know or if you want the e-book, please get it here. 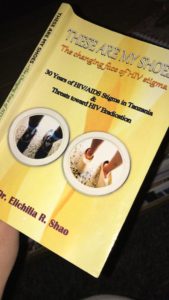