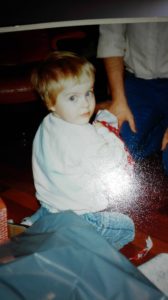 Marion grew up in the village of Heelsum in the Netherlands. She attended the Airborneschool for her primary education from 1985 till 1993. After that, she did VWO from 1993 till 1999 (preparatory scientific education – secondary school) at the Van Lingen College where she graduated with a science package including Physics, Chemistry, Biology, Mathematics, Dutch, English and Economics. She started her academic education at Radboud University (that time: Katholieke Universiteit Nijmegen) in Nijmegen where she got a doctoral degree (MSc) in health sciences with a specialisation in epidemiology and two minors in infectious diseases and environmental health in 2004. For this degree she did an internship at the National Institute of Public Health and the Environment (RIVM, Bilthoven) where she was employed as an infectious diseases epidemiologist after obtaining her degree. During her work on HIV epidemiology in the Netherlands, in 2006 she started another MSc degree in Medical anthropology and sociology at the University of Amsterdam. She conducted her fieldwork this MSc studies in the Kilimanjaro Christian Medical Centre in Moshi, Tanzania. Before graduating on her MSc in 2008, she started her PhD at Amsterdam Medical Centre at the University of Amsterdam in November 2007. She acquired her PhD degree within four years in May 2011 when she defended her PhD thesis on ‘Combination antiretroviral therapy among immigrant and indigenous HIV infected patients: quality of life and treatment adherence‘.

Since December 2010, Marion has been working at the Kilimanjaro Clinical Research Institute (KCRI) in Moshi, Tanzania. She is the datamanager of KCRI and has a position as post doc researcher. Her main topic of research is mobile health (mhealth) and currently she is the principal investigator of several research projects on HIV treatment adherence, Tuberculosis treatment adherence, contraceptives and family planning, including qualitative research and clinical trials. She is also involved in other projects on pharmacovigilance and improving tuberculosis treatment.

Marion is married to Bernard and they have two children. Together they run Caracal Tours & Safaris Ltd, a small family safari tour operator. Marion is mainly responsible for the sales and Bernard for the implementation of the safaris.