The psychology of the Kilimanjaro 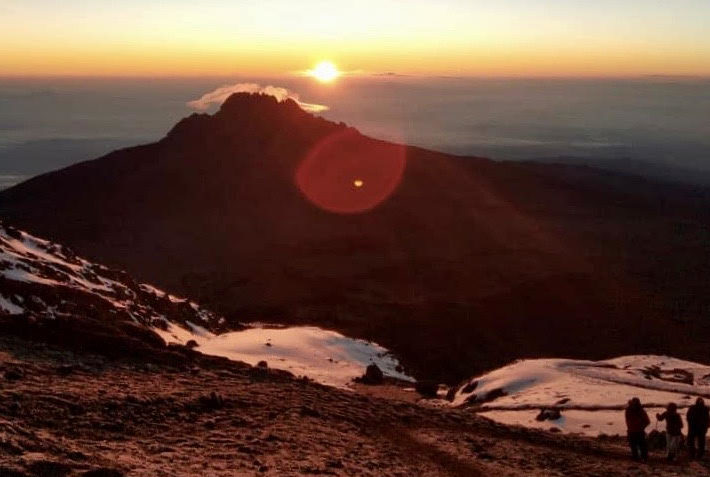 Kilimanjaro is a mountain of psychology. It is a lifetime achievement if you reach the top, but it is also a personal retreat. I hear this from several of our guests who climb the mountain with Caracal Tours & Safaris. They always come back enlightened, emotional or with new ideas. Years ago, I experienced the same, Kilimanjaro works like therapy. This week, our guest Aad reached Uhuru Peak (which I didn’t in 2010) after a long and heavy life-journey.

I climbed the mountain in 2010 and because of oxygen depletion the only thing you can do besides walking and watching is thinking. So, I literally had six days to overthink my life and concluded that that life was not right. It was when watching the sunrise behind Mawenzi Peak, after failing to reach Uhuru Peak, that I thought my life at that time did not reach the summit that I wanted to reach. For many years, I had the wish to work and live in Sub Saharan Africa. It was here, during this moment, that I decided to leave my life in the Netherlands behind and move to Tanzania. As such, I often call it ‘Keerpunt Kilimanjaro’ (Turn around Kilimanjaro).

Our guest coming down from the mountain

I am waiting at Mweka gate. Our Kilimanjaro mountain guide sends us an SMS that 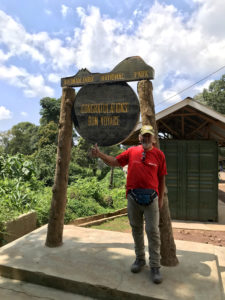 they are almost at the gate. I start calling the daughter of our guest through WhatsApp videocall. I direct the video towards the mountain and within a minute, a red t-shirt becomes visible next to our guide. They walk down unexpectedly vivid and fast. Only three meters left and Aad starts saying: ‘sjongejonge, wat is dat zwaar zeg’ (meaning: sjongejonge, that was tough)’. I tell him that I have someone on the phone and he immediately recognizes his daughter…a tear…a stuttering word and a bye…he is too emotional to say more. When he gets calmer…he starts telling me his story.

Years ago, in Kenya

About 40 years ago, Aad was in Kenya with his family. While they were watching the majestic Mount Kilimanjaro (highly probable from Amboseli NP), he tells his wife: ‘One day, we will reach the peak of that mountain.’ But it never came to that point as soon after the Kenya trip, his wife falls sick with anorexia and after a long, tiring process of eight years, she passes away. Aad has difficulties to regain his life with two daughters at that time, but finds a way to deal with his loss through first helping other anorexia patients and later building a community of asylum seekers running an agricultural farm in the Netherlands.

I am at the vakantiebeurs (travel show) in Amsterdam. I talk with many people, typical travelers, adventure seekers, but also to Aad and his wife. He wants to climb Mount Kilimanjaro. I tell him more about such a trip and that training is very important. I emphasize much on this as at that time I really wonder if he will be able to climb. Also, his age does not seem to be in favor of climbing a 5895-meter high mountain. But he tells me it is his dream, and who am I to take away that dream. So, we start planning and so it happened that on 2 November 2019, Aad reaches Uhuru Peak on his 67th birthday. I am grateful that I learned to know Aad. He seems to be someone who never gives up on his dream despite the dream carrying a heavy emotional burden. Sometimes, at Caracal Tours & Safaris, we have those clients that we will not easily forget and Aad is certainly one of them. Such an achievement to reach the peak with that emotional background. Congratulations Aad!